Our professional staff offer a variety of lessons, clinics and events designed to accommodate everyone from beginners to championship level players.

Kelly Marshall, Director of Athletics  knows what it takes to succeed on the court. With over three decades of playing and coaching experience on multiple levels, Kelly brings a high level of skill and expertise to our program. Her extensive knowledge provides an atmosphere that is positive and enables athletes to work through the struggles and on to success.

Kelly’s tennis background began at 11 years old and progressed to a NCAA Division 1 University. She held a National ranking of #3 in doubles and # 10 in Singles and was named a Sun Belt All Conference Player. She also led her team as Captain all four years. Following college, she competed in several professional tournaments before becoming a USPTA Elite Professional. Kelly currently serves as a Vice President of the United States Professional Tennis Association’s Texas Board and is a conference speaker.

Fanie Reinach, Associate Teaching Professional is a certified USPTA teaching pro and former ATP tour player, has over thirty years of coaching experience, teaching at all levels of the game. In addition to playing singles and doubles on the ATP tour, Fanie played tennis for Trinity University in San Antonio, Texas, where he received full scholarship and completed his B.A. in Business and Finance.

At the professional level, he has trained Lori McNeil, Lindsey Davenport, Laura Gildemeister, and Elna Reinach on the WTA tour—and captained and coached the South African and Peru Federation Cup tennis teams. He also spent a number of years training and preparing juniors for competition as Associate Director at the John Newcomb Tennis Academy in New Braunfels, Texas.

After retiring from professional and competitive coaching, Fanie spent the last two decades serving as a teaching pro at various tennis club facilities in Texas, including Barton Creek Country Club and Resort, Bentwood Country Club and Resort, Lakecliff Racquet Club, and the South Austin Tennis Center. In this capacity, he has organized and run clinics, lessons, and programs to help a variety of recreational players—ranging from beginners to the more advanced—progress in their league/tournament rankings and achieve their personal goals.

John Hospod, Associate Tennis Professional started his professional tennis career in 1996 as a tennis pro at Balcones Country Club in Austin after playing tennis at Vassar College in New York. During his tenure at Balcones, John rose to level of Head Professional. In 2000, John left for a position as Director of Tennis at the Georgetown Tennis Center. After several years splitting time between professional photography and tennis, John has returned to full time coaching.

John specializes in a mastery of the mechanics of the modern game and keeping up to date with current cutting edge changes in stroke production. His unique approach allows for the beginning student to quickly obtain advanced techniques that may be refined over time. Returning students benefit greatly from learning the contemporary game. This method allows for the experienced players to work toward the production of more effective strokes while keeping the focus on injury prevention. The advanced student benefits from John’s meticulous attention to the subtleties of the modern stroke production. This more flowing and relaxed style of play enhances performance.

Jo Atherton, Associate Tennis Professional, has over thirty years of coaching experience ranging from beginners to players competing internationally. She has a diverse background having held positions as Head Pro at Tennis und Badminton Centrum Einfeld in Germany, Academy Head Pro and the Director of Tournament Play at the John Newcombe Tennis Academy, Assistant Pro at Barton Creek Resort and Country Club, and Head Coach at NC Wesleyan College. These varied experiences taught her that there is no one size fits all to coaching tennis. Finding out what motivates someone, how someone learns, and working around limitations or injuries are the things that challenge but also excite Jo.

Jo grew up in a family where tennis was the central theme. Her mother was a tennis pro and her coach while her father, a former professional soccer player, made sure that proper fitness levels were met. While it was a great way to grow up, Jo’s true passion for tennis came during her college years where she played Division 1 for the University on North Carolina at Wilmington. The first few seasons were difficult but after several tough losses she started to relax and find joy in playing. This led to improved results and a passion for playing. She continued to play after college in Challenger tournaments and in the German Leagues.

Brad played collegiate tennis at Sierra College and then went on the eventually coach the both the Men’s and Women’s teams. Under his direction, the teams won a combined seven Conference Championships! Brad has been certified with both the USPTR and the USPTA and has worked with countless juniors in the Austin area, most recently at South Austin Tennis Center and the Polo Tennis Club.

Joe Sewell, Professional Associate Joe has been a part of Onion Creek Club for 20 years. He has played tennis for 30 years and has been teaching for the past 10 years. Joe’s passion for the game shows every time he is on the court.  Joe is originally from Highlands, North Carolina. His primary responsibility is to maintain our clay courts and keep us in the fantastic playing conditions he has for over 20 yrs. Joe has a Clay Court Certification from the 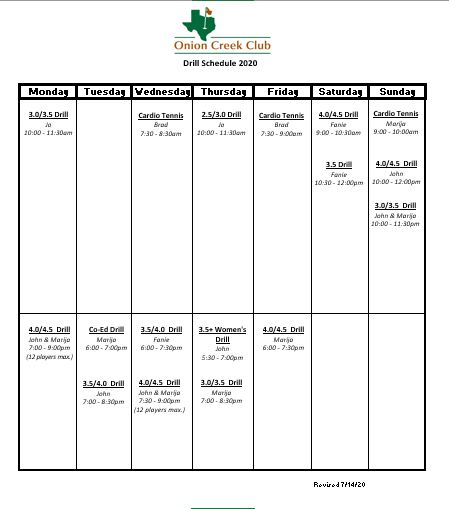 The Onion Creek In-House League is a great opportunity to meet some new friendly faces. Our league is quite unique and extremely fun! Each Tuesday is different, as one week you might play doubles while the next you might play mixed. All leagues run for six weeks and are open to all players within 2.5- 4.5 levels of play.

Call the Pro-Shop or email Kelly to learn more about our adult program and reasonable non-member rates for lessons and clinics.
Phone: (512) 291- 8846
Email: kmarshall@onioncreekclub.com

Juniors are an important part of Onion Creek Tennis and we boast the fastest growing program for young players in the South Austin- Buda- Kyle area.

Our impressive range of junior clinics and top-rated professionals help children to learn the game or improve their skills in a nurturing setting that emphasizes fun!

Private lesson rates are $75 per hour.

Note: Private lessons must be cancelled at least 24 hours prior to scheduled appointment. No-shows and late cancellations will be charged in ful Many of our juniors participate in state and local tournaments in addition to playing on one of our Junior Team Tennis (JTT) teams in the Spring or Fall.  Email Kelly to find out more about our junior program and reasonable non-member rates for lessons and clinics.  We can also answer questions about other opportunities for your young player to participate and compete in local and statewide events.